The plant is a native of south Europe and is cultivated in Spain, France, Italy, Greece, Turkey, Persia, India and China. Cultivation in India is mostly confined to the table-land of Pampur (5,300 ft. above sea level) in Kashmir and Kishtwar in Jammu.

The saffron plant is a small bulbous perennial, cultivated for its large, scented, blue or lavender flowers. The flowers have a trifid, orange-coloured stigma which along with the style-tops yield the saffron of commerce.

The glycosides, crocin and picrocrocin together with lycopene, ß-carotene, g-carotene, zeaxanthin and a crystalline hydrocarbon1. The essential oil of saffron deposits, on standing, stearoptene, probably a tertiary alcohol2. 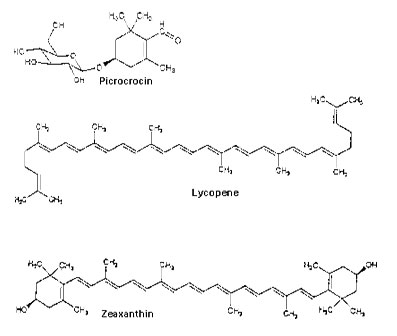 Oral administration of 100mg/kg of the saffron extract significantly inhibited the growth of Dalton's lymphoma ascites (DLA) and S-180 solid tumor by 87 and 41 percent respectively, in mice. A dose of 150mg/kg delayed the onset of tumor formation and inhibited further growth of Dalton's lymphoma ascites and solid tumor by 80 percent. Chromium release cytotoxicity assay reflected the sensitivity of DLA and S-180 tumor cells to cytolysis (in vitro) in the presence of the extract. Estimation of serum vitamin A and beta-carotene levels from S-180 tumor bearing mice treated with saffron extract indicated elevated serum levels of serum vitamin A and beta-carotene. Chemical analysis of the antitumor compound from saffron extract indicated that crocin (a natural carotenoid) was responsible for the observed biological effects. Crocin probably induces the therapeutic antitumor effect by its provitamin A activity and/or its antioxidant activity or by modulating the functional levels of other antioxidants5

Toxicology
Saffron bulbs are toxic to young animals, and the stigmas in overdoses are narcotic6

Saffron is credited with various medicinal properties. It is used as a nerve sedative and emmenagogue. It is used in fevers, melancholia and enlargement of the liver. It also has stimulant and stomachic properties and is considered to be a remedy for catarrhal affections of children.